She stated that using the form approvals are made at an “unacceptably high rate” and has a “high cost to the integrity of the U.S. Exempt Sector.” As an example, the IRS approved an organization that intended to establish and operate a farmer’s market as charitable while authority indicates that this is not a charitable purpose. Another stated that on dissolution, its assets would be distributed evenly among the families of the relevant sports team. A third organization had been dissolved by the state of incorporation at the time it received a favorable determination ruling.

While the Taxpayer Advocate has long maintained that 1023-EZ is not close enough to allow the IRS to determine whether an organization qualifies for 501(c)(3) status, the numbers and statements in this current report are striking. The Taxpayer Advocate performed studies in 2015 and 2016 of a sample of corporations in 20 states with articles of incorporation posted online whose Form 1023-EZ application was approved. A review of these records showed that 26-37% did not meet the organizational test. The Taxpayer Advocate shared these results with Tax Exempt and Government Entities (TE/GE). TE/GE did not agree with the Advocate’s conclusions in every case, but agreed there was an “organizational test non-compliance rate” of 17%. Another study in 2017 included four more states that make the articles of incorporation available online, and 46% did not meet the organizational test, with 2/3 of organizations in the four new states (39 out of 58) failing to meet the test.

It will be interesting to see how the new requirement that applicants provide a 225-character description of their activities affects the statistics. The Taxpayer Advocate has also asked for a number of additional reforms as shown below: 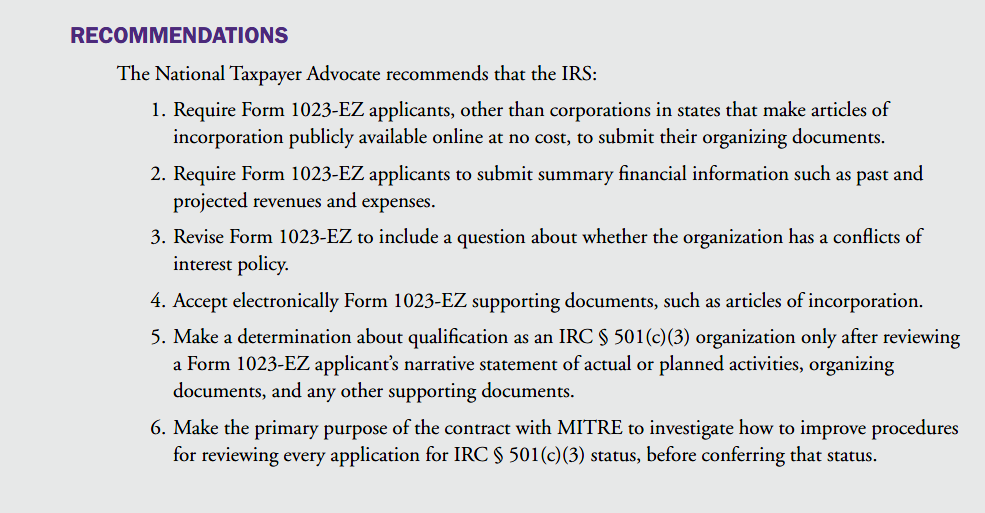